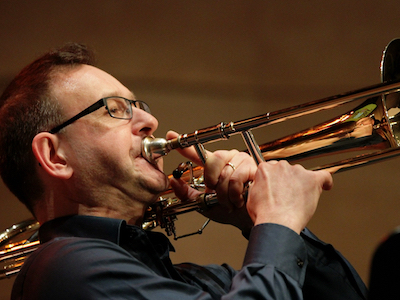 The English Ian Bousfield (1964) grew up with the brass band tradition. At the age of 15 he won the Shell London Symphony Orchestra grant, after which many opened doors for his orchestral career.

From 1983 he has been Principal Trombone with the Halle Orchestra, the London Symphony Orchestra and the Vienna Philharmonic / Vienna State Opera. As a sought-after soloist, Ian has performed with various orchestras, worked with many well-known conductors, made many recordings and gives clinics worldwide.

Ian is currently a trombone teacher at the Hochschule der Künste in Bern and a staff member and honorary member of the Royal Academy of Music in London.

Ian Bousfield was a guest at Slide Factory in 2013 and we are delighted that he will be there again this edition!

This English artist has put together a Brexit program especially for this occasion.